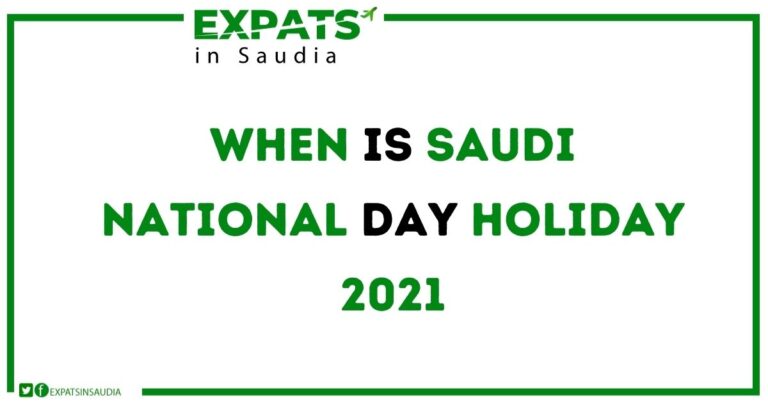 Saudi Arabia’s national day is always celebrated on September 23. Locally known as Al-Yawm Al-Watani, this is the day on September 23, 1932. When King Abdulaziz announced the country’s unification as a kingdom. It may be that Saudi National Day Holiday 2021 will be on September 23, 2021.

(1)- Did Saudi Arabia Celebrate Its National Day Holiday From The Start?

In 1932, the land got finally united under the banner of Abdulaziz Ibn Saud, the founding father of Saudi Arabia, who then became the first king of the kingdom and the custodian of the two holy mosques.

However, let’s take a closer look at how the kingdom and its people celebrate this significant occasion.

What Does The Saudi Flag Symbolize?

As you may know, Green is a recurring theme on National Day. Also, it is the dominant color of the Saudi flag. The Saudi flag has white calligraphy on a green background that reads, “There is no god but Allah and Muhammad is the Messenger of Allah,” which is a profession of faith that every Muslim says during his daily prayers.

Also, like many other flags worldwide, the Saudi flag represents the kingdom’s rich history, high philosophical views, and national pride and identity. Moreover, on Saudi Arabia National Day, you will find no shortage of people wearing green clothes and proud of their heritage as countless green flags flying in the air.

How People Used To Celebrate The Saudi National Day Holiday Before The Pandemic?

Before the epidemic, Saudi citizens look forward to National Day as it allows them to take some time off work and spend two days (or more) on public holidays with friends or family.

Officials held light shows and cultural exhibitions in the country’s capital during the event. Also, with malls, hotels, restaurants, and almost every other establishment offering special deals and discounts on their services and products, many Saudis consider National Day special.

Furthermore, because of its importance, Saudi National Day has traditionally been considered an election day for the Saudi government to inaugurate and make announcements.

In 2009, for example, the King Abdullah University of Technology officially opened on September 23 with several heads of state participation. In 2014, Jeddah’s turn to impress and unveiled the world’s tallest flagpole, specifically designed to commemorate National Day.