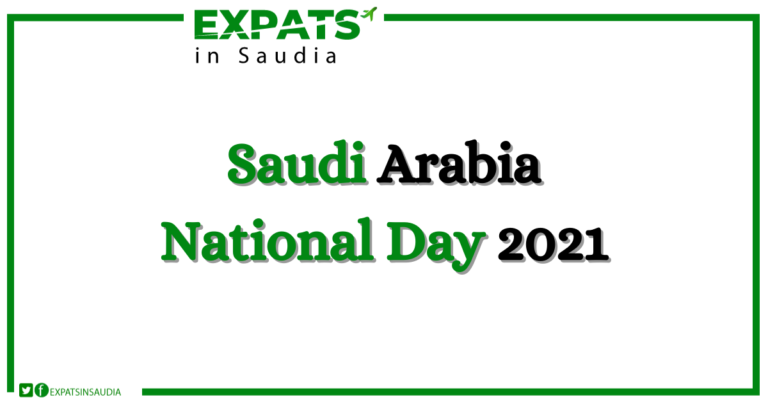 Before that, Saudi Arabia only celebrated religious festivals, Eid and Hajj, as public holidays. However, since King Abdullah came to power, National Day has received a cure. Also, since then, the kingdom has celebrated Saudi National day with numerous exciting activities.

National Day in Saudia Arabia, SEPTEMBER 23, known as “Al-Youm-Al-WATANY”. Moreover, it is a public holiday. Therefore all the government and private sector will have a holiday. However, If it falls on a Saturday, then Sunday will be a public holiday in return. If it falls on Friday, then there will be a holiday before that, and If these changes coincide with other holidays, an additional day of compensation will not be granted.

When Will Saudi Arabia Celebrate Its 91st National Day?

The Kingdom of Saudia will celebrate the 91st anniversary of its National Day on September 23, 2021. However, National Day (Al-Yawm Al-Watani) commemorates the unity of various Bedouin tribes, sultans, small kingdoms, and emirates along a large area of the Arabian Peninsula stretches from the Red Sea to the Persian Gulf. Also, this day is a day of joy among young Saudis. Therefore they dress up accordingly. However, Children also celebrate this day alongside their family members.

How Saudi Citizens Celebrates this Day:

On this day, the beginning of modern Saudi Arabia in 1932 is commemorated. Moreover, people remember the great stories and values ​​that formed the early nation-state. However, they remember them, share them and respect their sacrifices on NATIONAL DAY.

Also, in this memory, it is an opportunity for citizens to renew their loyalty to their beloved homeland and reaffirm their dedication to the King of Saudi Arabia.

Also, on this day, Saudis are asked to consider their role and responsibilities in integrating the system into the modern Saudi state. However, people reflect on such values, thanking their country and its leaders for putting the interests of every Saudi citizen at the center of all development and development projects for decades.

Moreover, this day is a way to encourage a significant national effort for the nation’s continued future development. Moreover, (Vision 2030) Saudis working in public, private, or non-profit organizations are called upon to work tirelessly to meet the expectations and responsibilities of their society and the Saudi family.

Also, its celebrations take many forms and are growing in number year by year. However, On this day, citizens like to take to the streets in large numbers, in public areas, parks, malls, shopping centers, beach fronts, tourists, and outdoor fields. Moreover, many events are organized for their entertainment. These include:

Ottoman Turks conquered Arabia and the majority of the Middle Eastern countries during their empire. However, the Ottoman Empire collapsed after World War 1 in the 16th century. That was when the kingdom of Saudi Arabia began to develop.

Also, King Abdul Aziz (Ibn Saud or “son of Saud”), the ruler of Najd, recaptured his family’s hometown of Riyadh in 1902. Therefore this was the beginning of a new era.

However, In 1903, he acquired al-Hasa after nearly three decades of conquests in the region

In 1925, King Abdulaziz conquered the Hijaz, or Western Arabia, and a year later, he became the king of the Hijaz.

King Abdulaziz ruled both Najd and Hijaz separately for the next five years. Also, in 1932, he was able to make a significant impact and control Central Arabia. The king later consolidated the territories and renamed “House of Najd” to his family name “House of Saudi Arabia” or “Kingdom of Saudi Arabia.”

September 23 has been recognized as National Day in Saudi Arabia since the unification of the two regions and renamed the kingdom’s name. However, before 2005 it was not celebrated on a national level. It was only in 2005 that it was declared a public holiday in addition to a religious one.

Green is a recurring theme for this Day, as it is the dominant color of the Saudi flag. The Saudi flag has white calligraphy on a green background that reads, “There is no god but Allah and Muhammad is the Messenger of Allah,” which is a profession of faith that every Muslim says during his daily prayers. Also, this reflects Saudia as one of the powerful Muslim countries.

Also, just below the inscription is a sword which is a symbol of King Abdul Aziz. The primary color of the flag is also a symbol of Islam, and it is the favorite color of the Prophet of Islam.

However, like many other flags around the world, the Saudi flag represents the kingdom’s rich history, high philosophical views, and national pride and identity. Also, on Saudi Arabia National Day, you will find no shortage of people wearing green clothes and proud of their heritage as countless green flags flying in the air.

Past And Future Observance Of Saudia‘s National Day Dates:

WHEN IS SAUDI NATIONAL DAY CELEBRATED?

The Kingdom of Saudi Arabia will celebrate the 91st anniversary of its National Day on September 23, 2021. Also, national Day (Al-Yawm Al-Watani) commemorates the unity of various Bedouin tribes, sultans, small kingdoms, and emirates along a large area of the Arabian Peninsula stretches from the Red Sea to the Persian Gulf.

HOW IS THE SAUDI NATIONAL DAY CELEBRATED?

Light shows and cultural exhibitions were held in the country’s capital during the event. Also, many Saudis consider National Day to be a special occasion with malls, hotels, restaurants, and almost every other establishment offering special deals and discounts on their services and products.

HAS THE NATIONAL DAY ALWAYS BEEN CELEBRATED IN KSA?

Since 2005, Saudi Arabia has celebrated its national day in a festive mood every September 23. However, before that, Saudi Arabia only celebrated religious festivals, Eid and Hajj, as public holidays.