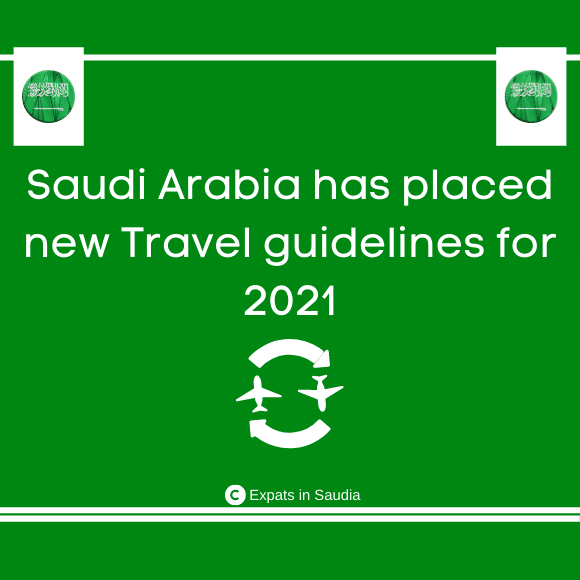 While taking care of the preventive measurements against COVID-19, Saudi Arabia closed its borders (Land, Sea, Air) on 20 December 2020. Now only recently, they have opened flight operation but with new air travel guidelines for 2021

Initially, the borders were considered to be closed for one week till 27 December 2020. However, the discovery of a new mutation of COVID-19 in more than ten countries of the world led the Saudi Government to close the borders for the next week.

Airlines will be able to take passengers to and from Saudi Arabia under new air travel guidelines for 2021. While doing so, they have to take care of the COVID-19 preventive measurements.

Initially, it was decided that all flight operations in the Kingdom of Saudi Arabia except the United Kingdom and nine other countries where a new mutation of COVID-19 was found will re-operate from 3 January 2021 (11:00 AM).

But later, the plan got a change, and flights from the United Kingdom and many other countries became operational.

Although the Saudi Government allows airlines to carry on flight operations all across the world. However, the Health Ministry made a strict policy for the tourist or visitors for the people coming from infected countries.

Here is the complete list of all regions where we have a new mutant of Covid 19.

17- Many other regions of the United Kingdom.

Rules for people coming from these areas:

Covid Situation in Saudia as of 4th January 2021

Approximately 2375 cases are active out of 363080 total cases. Only 358 out of these cases are critical cases throughout the KSA.

Advice from the Ministry of Health:

According to the Health Ministry of KSA,

“People coming from Australia, Singapore, the Netherlands, Canada, Denmark, Iceland, Germany, Hong Kong, Italy, France, Spain, Sweden, Japan, and Lebanon should have to isolate themselves for a period of 2 weeks and provide 2 COVID-19 reports.

The Ministry of Health of Saudi Arabia further said that

“People coming from the countries other than the countries as mentioned earlier should have to isolate themselves for a period of 3 days to 1 week most. They must present a COVID-19 negative report, and these guidelines and travel rules will remain active till further announcement.”

The country decided to continue the worldwide flights and passage through its territory and seaports beginning from 03 January 2021 (Sunday, 11:00 AM)

According to the Saudi Press Agency, the Ministry of Health stated that “The Arrival into the Kingdom via air, land, and ocean will continue at 11 AM. Sunday”

A few limitations included asking non-Saudis from the UK, South Africa, and different nations where the Covid-19 variation had been identified to stay 14 days out of the Kingdom in any 3rd country before entering the Kingdom.