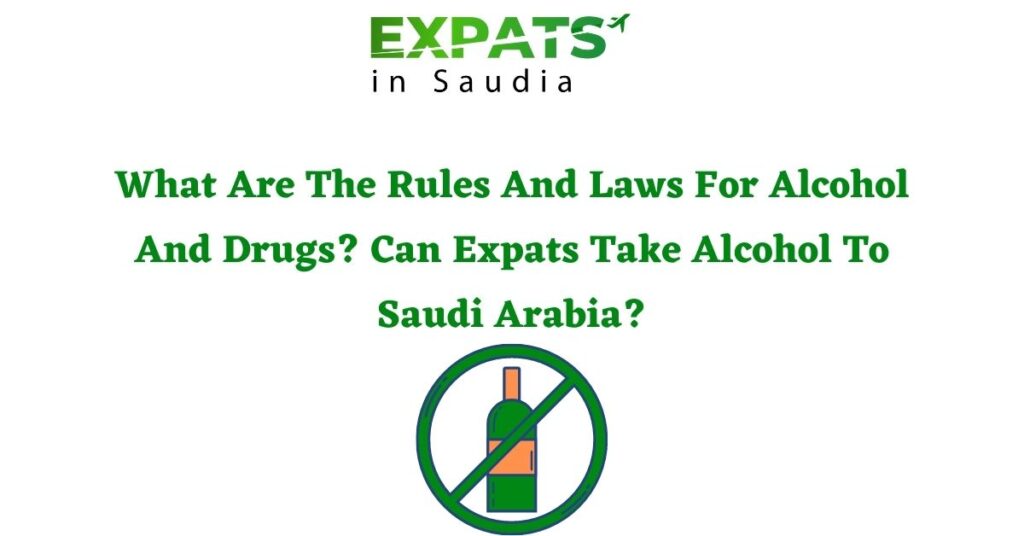 Foreigners need to understand that alcohol and drugs are illegal in Saudi Arabia. Here we have provided everything you need to know on this topic.

SHARAI, or ISLAMIC LAW, is strictly enforced in Muslim countries, and alcohol and drug offenses are considered crimes against God. This helpful guide looks at the state’s drug and alcohol policy – and what immigrants need to know. It includes the following information:

The current year started severely for three foreigners in Saudi Arabia. The Saudi government hanged Two Egyptians and a Pakistani on New Year’s Day to smuggle cannabis, illicit opium, amphetamines, and later for heroin. In 2019, the nation executed at least 59 people for drug crimes, according to Harm Reduction International.

Saudi Arabia imposes severe penalties on the import, manufacture, possession, and use of alcohol and illicit drugs. Those found guilty can expect lengthy prison sentences, heavy fines, public flogging, and possibly deportation. To emphasize that anyone found dealing in drugs in Saudi Arabia is liable to the death penalty.

Authorities have made no exception, and foreign embassies in Saudi Arabia are relatively powerless to intervene on behalf of their citizens regarding drug laws. Although detailed searches are an exception rather than a rule, travelers should expect to inspect luggage at ports of entry.

Some medicines or medical supplies are not available in Saudi Arabia, and it is illegal to import them into the country. Contact the Saudi Food and Drug Authority for more information and a list. It is essential to understand that there are severe penalties for importing illegal drugs or drugs into Saudi Arabia – including imprisonment and fines.

However, travelers who take prescription medications such as sleeping pills, painkillers and ADHD treatments can import them to Saudi Arabia. The most important thing is that you need to get a pre-clearance with an official medical certificate and a prescription from a doctor. Both should be translated into Arabic and should not be more than six months old. These documents are different from your medical passport, which lists all the medications you use or are allergic to. Passengers must apply for clearance at their local embassy at least one month in advance. Without these documents, travelers can at least see their drugs confiscated.

Saudi officials only allow the import of enough medicine for one month or for the duration of your stay, whichever is shorter. As a result, after visiting a licensed local medical facility, you will need to refill your prescription locally. However, you can also import some medicines that are not available in the country with the permission of the Saudi Food and Drug Authority.

See Also: Ministry Of Health: 85% Decrement In The Confirmed Cases Of Covid-19 Is A Good Sign Of Saudi Arabia

Like drugs, the production, sale, possession, and use of alcohol is forbidden in Saudi Arabia. Alcoholism is punishable by public flogging, fines, or long imprisonment, in some cases deportation.

The liquor business naturally carries a high penalty, severe penalties for those caught selling it to Saudi nationals.

What Does The Ban Cover?

Authorities have previously warned against drinking alcohol during trips around the country. You could get arrested if you cross the Saudi border intoxicated or under the influence of alcohol.

However, foreigners can sometimes obtain locally produced black market liquor in Saudi Arabia – especially on Western company compounds. It is called homemade wine and beer. According to a BBC report, foreigners often compete to make sugar-based beverages. Some foreigners believe that the authorities will ban the use of alcohol. However, police raids remain a constant threat.

Although Saudi Arabia has recently embarked on a series of social reforms, the ban will likely remain in place shortly. In early 2019, the country rejected reports that hotels and restaurants would serve alcoholic beverages as “fabricated lies.”

See Also: What Will Be The New Fees, Procedure Of Issuance, And Extension Of Vehicle Registration?

(3)- Blood Tests For Alcohol And Drugs In KSA

Foreigners in Saudi Arabia are required to undergo a medical test at the beginning of their contract. In addition, lawyers suggest that this may include drug screening, given the nation’s tough stance on drugs. The law does not explicitly prohibit drug screening. So, potential employees should be aware that pre-employment drug testing is unlikely to result in an employer’s reaction.

In addition, employers can test employees for random drugs and alcohol using a Labor Ministry-approved system and a registered government-designated clinic. This service is widespread in the oil and gas industry.